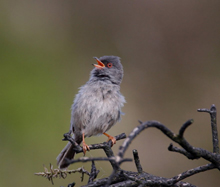 The Marmora’s Warbler found near the Blorenge, Gwent, 3 June, is the latest in a series of megastar birds to hit the British Isles in the past weeks. If accepted it will be the fifth record for Britain and the first for Wales. A resident or short-distance migrant of Sardinia, Corsica and the western Italian islands, it is remarkable that this bird has arrived here. As it is a second calendar male, it is more understandable that it has overshot its migration course, most probably due to a lack of experience.
This is a species with a curious linguistic geography. First described by Dutch zoologist Coenraad Jacob Temminck on Sardinia in 1820 as Sylvia sarda, where Sylvia means ‘inhabitor of the woods’ (in this case, ‘wood warbler’) and sarda refers to Sardinia. The species is known in almost every European language as Sardinian warbler. Avibase lists 20 languages in which this is the case. The exceptions are:

A varied list, though colour and geography seem to dominate as adjectives. In English (and in its translation into Welsh) the bird is described through a patronym, in honour of Italian naturalist Alberto Ferrera La Marmora, who had associations with Francesco Cetti and Franco Andrea Bonelli, both of whom have been homaged by eponyms and patronyms.
The recently split Balearic Warbler, Sylvia balearica, has a range restricted to, indeed, the Balearics (excl. Menorca). Described by Jordans in Mallorca, in 1913, it was considered subspecific to Marmora’s Warbler for decades. Not so surprisingly since its recent split and restricted range, it is known in many European languages as Balearic warbler; apart from in Catalan, the language spoken in the Balearics, where it is known as Busqueret coallarge, i.e. long-tailed warbler. As Balearic Warbler is the only species within the longer-tailed clade of the genus Sylvia to occur within the Balearics, its Catalan name does make sense.