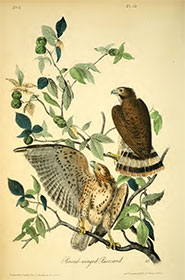 A detailed chronology of the nomenclature of Broad-winged Hawk has been provided by Frank L. Burns in his ‘A Monograph of the Broad-winged Hawk (Buteo platypterus)’, published in the Wilson Bulletin, 23 (1911), 143–320. Under ‘Synonymy’, Burns first describes the various binomials used historically for Broad-winged Hawk, and subsequently lists all the publications related to them, a monumental list.
Here follows a summary of the chronology.
It all starts in 1812. Scottish ornithologist Alexander Wilson was the first to describe and illustrate Broad-winged Hawk in his American Ornithology (Philadelphia, PA: Bradford and Inskeep, 1812), vi, 92–94, as Falco pennsylvanicus – for Pensylvania. Sadly Wilson did not have the chance to correct a naming error (he passed away in August 1813): he had already assigned Falco pennsylvanicus to a description of a specimen of what was then called Slate-colored Hawk (Accipiter velox (obsolete) = Rapid Hawk, from Latin velox = rapid, quick, and Latin accipiter = hawk, now Sharp-shinned Hawk, Buteogallus schistaceus = Slate-grey Chicken Buzzard, from Latin gallus = fowl, and Late Latin schistaceus = slate-grey). However, it seems that Wilson had understood his error and had left it with his friend and successor of the American Ornithology series of books, ornithologist George Ord, to be changed to Falco latissimus (which would be Broadest Hawk as Latin latissimus = broadest, from latus = broad) in an amended reprint of vol. vi (1824).
Over a short time period, a number of ornithologists changed and respecified the binomial of what is now called Broad-winged Hawk.

In 1901, American ornithologist Walter Faxon writes a letter to the editors of the Auk, 18 (1901), 216–18, pointing out that in 1823 Vieillot had already provided the specific Sparvius platypterus, providing the protonym. Faxon’s fascinating letter explicates how the naming of a species has been confused by the many editions of one book, Wilson’s American Ornithology. The Hungarian ornithologist who authored a number of subspecies of bird as Keve-Kleiner was born Endre Kleiner on 10 November 1909 in Budapest. He published under various names as a scientific author: as Endre Kleiner, as András Keve-Kleiner, and as András Keve. In addition, he would change and translate his first name according to the language of publication, thus Andrew for English and Andreas for German publications, respectively.
According to Alan P. Peterson, Keve-Kleiner’s naming history in publications is as follows: Endre Kleiner during 1930–1942, András Keve-Kleiner during 1943–1944, András Keve during 1946–1979. Hence he was mostly known as András Keve, although (presumably for standardizing reasons) his nomenclatural authorship is Keve-Kleiner.
He changed his family name from Kleiner to Keve (a shortening of the adjective keveset = little in Hungarian, thus hinting at the German adjective kleiner) in 1942, likely due to circumstances related to the ongoing World War II.
Keve-Kleiner authored the names of four subspecies of bird, three of which are of Eurasian Jay Garrulus glandarius, and one of White-winged Snowfinch Montifringilla nivalis: 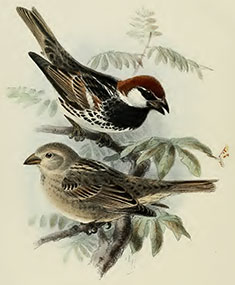